UPDATE JUNE 26, 2017: The Ministry of Education has revised the amount of funding it will be sending to districts to fund the changes needed to comply with the Supreme Court of Canada’s ruling on class size and composition contract language. The resulting amounts indicate that some districts will have trouble complying with the court order; for example, one district, Vancouver, is receiving $22 million LESS than the Ministry originally promised; Saanich is short $1.5 million; and Richmond is now $7 million in the hole.

In light of these new numbers and the current state of flux of the provincial government, it is currently very difficult to tell exactly which districts are facing shortfalls and how much they are short. We’ll keep an eye on the situation, but until there is some certainty it is not possible to compile an accurate shortfall list. 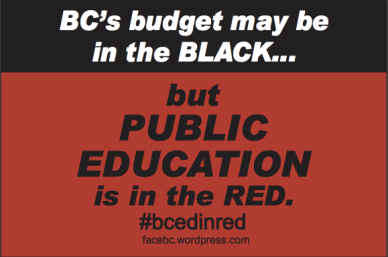 Last year we compiled a list of 33 school districts with a combined shortfall of $85.28 million for the 2016/17 school year before the province stepped in with various funding announcements that partly alleviated the shortfalls.

Unfortunately, school districts are once again beginning to announce anticipated shortfalls and the need for cuts, despite the government’s claim of “new” funding for public education in the 2017 budget. The “new” funding is going mainly to cover salaries for the teachers that must be hired to address class-size and composition pursuant to the Supreme Court of Canada’s ruling on the government’s breach of teachers’ Charter rights in 2002; some of it is also going toward funding new students entering the system. But districts face many costs that won’t be covered—costs that have been downloaded to them by government or that have grown over the years without a corresponding increase in funding. The BC School Trustees’ Association estimates that there are $96 million in unfunded costs outstanding for the 2017/18 year, and that is not including costs that will arise out of the class-size and composition changes.

*Note: The Ministry of Education seems to disagree with the Vancouver board’s use of class size and composition funding to reduce its shortfall, so this number is subject to change.